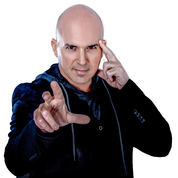 Alan Chamo didn’t come into this world by magic, but he has made his world a magical one!

He was born in Buenos Aires, and at the youthful age of seven, his uncle introduced him to the world of magic. He soon developed his other natural talents: Mentalism, Hypnosis, music and performing arts. This valuable experience has helped Alan build an international profile as a mentalist and hypnotist.

Alan has performed in the most watched Spanish-language programs in the U.S (Don Francisco, Despierta América, Lente Loco, República Deportiva among others) His television appearances have made him a permanent and noteworthy celebrity of Latin show business. He has performed for the most diverse audiences throughout the U.S in English, Spanish and Hebrew. Younger than Merlin, more experienced than Harry Potter and more accessible than Houdini, Alan Chamo captivates and entertains audiences with his unique style, his charm and his vibrant

Alan has won many awards, one of which is the international brotherhood of Magicians competition, held in Hong Kong in 1999. He was the first mentalist also to perform live in “Premio Lo Nuestro”, the most prestigious awards ceremony within the Hispanic community with 50 million viewers. Alan’s success has led him to start producing his own television show which will be aired soon. Today Alan is a favorite headliner of the major cruise lines and corporate clients worldwide.