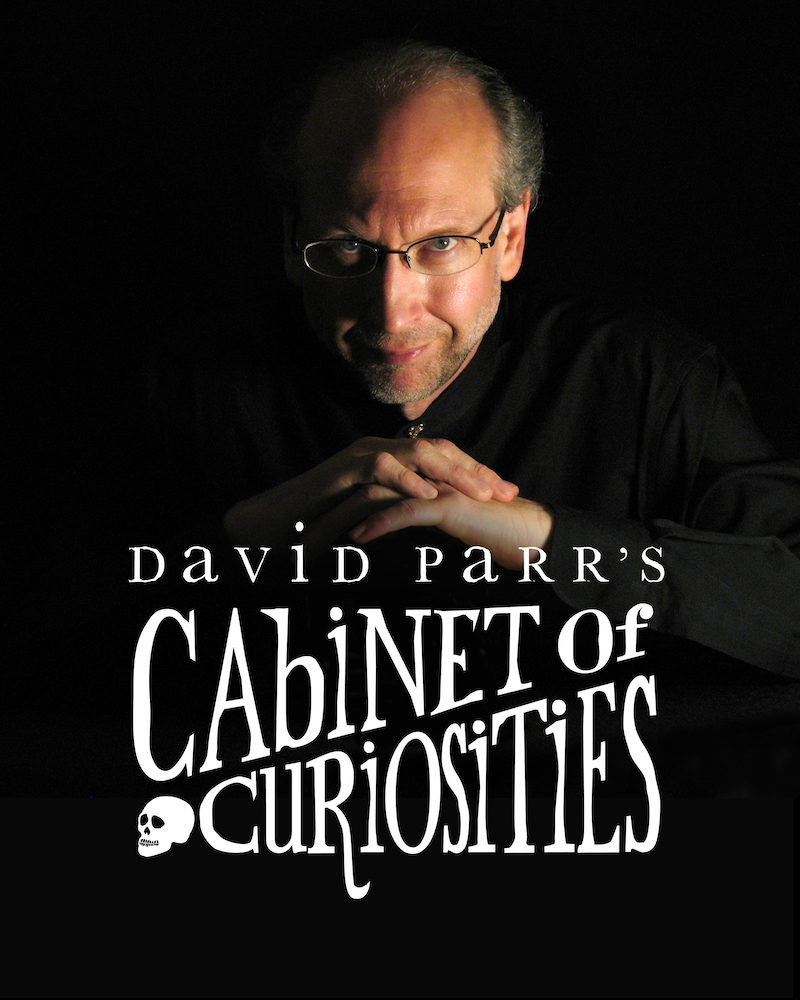 Join award-winning magician David Parr for a guided tour of his collection of magical curiosities. David has gathered his favorite artifacts and stories to share with you in this 75-minute show of mystery and magic. Every shelf of David Parr’s Cabinet of Curiosities offers an encounter with something weird and wonderful. Each object has a story — some strange, some spooky, some amusing, and all of them amazing.

Which curiosities will be featured in tonight’s show? There’s only one way to find out: pick a numbered tag and that will lead to the next mysterious item on the shelf. It might be a macabre toy from 18th-century France. Or a golden goblet from a dinner party in Renaissance Italy. Or maybe a treasured book from David’s childhood. Some objects look deceptively ordinary — an old deck of playing cards, perhaps, or a spool of silver thread. But in David Parr’s hands, they come alive with magical possibilities…

Magic fans will recognize David from his appearance on the hit TV show Penn & Teller: Fool Us. There, his magic was put to the ultimate test in front of the cameras, a live audience of hundreds, millions of TV viewers, and two very savvy Las Vegas magicians. (Spoiler alert…) David fooled them all and not only took home the coveted Fool Us trophy, but also won a guest spot in the duo's live show at the Rio hotel in Las Vegas!

In the hidden world of magicians, David is best known for his theatrical performing style and for his writing and teaching skills. He has published several highly regarded books for magicians, been a technical consultant to theatrical productions, presented at academic conferences, and provided guidance and instruction to magicians at lecture appearances across the United States and Canada. For a decade or so, he was a featured columnist, proofreader, and copy editor for the world’s top magic journal. His thought-provoking writings about the art of magic have also been featured in publications in Germany, France, Australia, Denmark, The Netherlands, and Sweden.